Listening to The Now Show on Radio 4 days before the US Election really got me thinking.  As they blasted through their take on REM’s earworm, it struck home to me that I don’t feel fine about what will happen on Tuesday… or about what is happening more generally for that matter.

Twitter is full of politicians, journalists and Alastair Campbell drawing comparisons with the rise of the 3rd Reich and these might well be valid, but as an RE Teacher it occurred to me that Church History might offer a better comparison.   What we are experiencing is not so-much POST TRUTH POLITICS but rather the result of a modern form of Gnosticism, ordinary people being convinced that they posses the truth and that it will liberate them.

Putting this in context, as I see it the rise of Trump in the USA, Brexit and the resurgence of the right in the UK, the Front National in France [and I could go on, and on…] is all the result of a general distrust of authority that is borne out of the gross inequality, resentment and alienation caused by globalisation since the end of the Cold War.

Through the 1990s, following on from the fall of the iron curtain, representatives of the government, the Church, academia, the police, celebrities, royalty etc were “discovered” to have abused their positions, usually in a humiliating way.

The abuse of authority was not new, but without the excuse of being on a war-footing against Communism, there was less to constrain the media in exposing it… and the public – poor and resentful and without hope in the post Thatcher, post Reagan boom and bust world – lapped up these stories and provided a massive financial incentive for newspapers to rake up more and more of them.

With its huge public influence, those in authority sucked up to the traditional media, hoping that they could use its power for their own ends, but the public interest in stories about humiliating authority figures was always greater than its interest in any other kind of story.  Understandable perhaps, given peoples’ growing sense of dis-empowerment and rage at representatives of a “system” which perpetuated inequality. Naturally enough, acting “in the public interest” transmogrified into serving the public’s baser desires to get even and vindicate their own inadequacy.

Newspapers crossed line after line in pursuing lucrative stories, including paying ordinary people for information – or misinformation – that could bring down powerful people.  Peoples’ “secret knowledge”, things that only they and their circle knew, became valuable and provided the means by which they could be plucked from obscurity and earn the immortality of fame.

By 1997 the feeling that every one of us has the power to bring down anybody we envy or dislike was widespread.  Teachers, Vicars and Politicians, once shielded by their authority, were now subjected to a hail of accusations, deserved and otherwise.  The charismatic President  of the USA was brought down on the say-so of an intern and nothing could save him from having details of his anatomy discussed on chat-shows.  Ordinary people developed a sense of superiority which made them willing to continue as they were and removed all desire to change the “system”.

Alienation, frustration and economic subjugation became tolerable and even desirable when one labours under the delusion that each one of us has enormous power should we choose to exercise it.  Why did Christianity attract Constantine and later Roman Emperors?  Because it’s promise of salvation and eternal life gave ordinary people hope, made them compliant and even willing to fight to support the system that kept them ordinary.  Today, so long as a few idiots test their power and bring down a succession of authority figures, there is no need and no incentive for the rest of us to do so, just believing we could is enough to make us tacitly support the status quo.

Another effect of peoples’ belief in their own secret power and their suspicion of authority was to make people more complacent and less ambitious.  People stopped aspiring to better themselves through education and earning traditional positions of authority.  Why would anybody choose to learn, be successful or exercise authority when success and authority always carries with it the threat of the pillory?  The only sort of aspiration left was to anonymous wealth through gaining a position which carries no authority or public profile but which is remunerated on a level which would facilitate escape to live in a tax haven.

Through the Millennium productivity and political engagement went down and down and reality TV was born, offering a different kind of fuel for the delusion that we all posses a secret something which could redeem us one day.  The idea of public service died as the middle classes refocused the aspirations of their offspring away from the Houses of Parliament, academia or the Church and towards the Hedge Funds. The attempt to bring down the bankers after the crash of 2008 showed people rushing to slam the door after the horse had bolted, pouring out impotent rage against the middle classes who stubbornly refused to step up and assume their now traditional role of authority-figure-to-be-ritually-disgraced.

In the economic doldrums and in the absence of sufficient numbers of other suitable authority-figures to bring down (very few people exercised any authority at all by this time) in 2010 the authority of the traditional media became its own focus!

It seems to me that the root causes of our present condition are inequality and alienation on the one hand and false hope on the other.  If we could address inequality and give people a prosperous future that would be wonderful – but globalisation has run out of all control and the disastrous consequences of Climate Change and AI are on the horizon.  Destroying false hopes seems the only realistic way forward and this involves helping people to see the situation that they are in more clearly.

If we do nothing the world will surely be vulnerable to a new Constantine, a megalomaniac who will seek to unify and harness the false hopes of the masses by establishing an orthodoxy that will support him in exercising a new form of authority.  This is not POST TRUTH POLITICS but a politics which really understands the importance of controlling, creating the truth.  NB: To call it post-truth suggests that there is or has been, a standard of truth that is generally accessible and that is independent of how people choose to see things… something that I doubt. 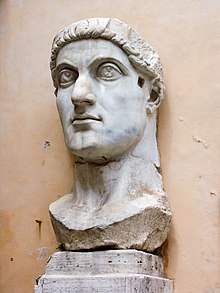 The experience of the Early Church might suggest that he will…

1) build monuments that glorify randoms who have been dragged from obscurity to immortality by redemptive acts of “truth-telling” i.e. humiliating authority figures.  I wonder how long it will be before Trump offers Edward Snowden a pardon and facilitates Julian Assange’s release while re-writing the history of what they actually did – that they embarrassed Clinton will surely be enough to make them heroes in the new regime?

2)  develop and perpetuate martyr myths, the gorier the better.

3) establish dogmas which require people to publicly confess assent to impossible contradictions as a mark of membership. Pillory (or kill) anyone who refuses to accept these dogmas.  Refuse access to education or professional employment to anybody who has not publicly assented to these dogmas.  In practical terms, I think that Trump will find the answer to college access in the US will be philanthropic scholarships which will offer free access to higher education, including online higher education, for his supporters.

4) create impossible aspirations in women and set them off on quixotic quests to achieve the impossible in their own lives and bodies.  This should keep them quiet for a couple of thousand years, so long as the supply of peculiar clothing etc is uninterrupted and education remains poor.  It will also keep them out of education and proper employment, as there will not be time to maintain aspirational lifestyle AND study or pursue a career.  With women (and children) dependent on men, men will be easier to manipulate as well.

5)  preach “crusades” against groups who are different, calling on people to sacrifice and die for the cause and promising them immortality in return.

If ever there was a case for saying that studying Theology is relevant to the modern world, this is it.  Its value, to my mind, lies not so much in giving young people the opportunity to learn about peoples’ religious beliefs and practices today as in giving them a context for understanding the history and politics and culture of our time, the perspective that we need if we are to engage critically and intellectually and exercise the only sort of freedom that is possible.

No wonder that public policy is set to remove opportunities to study Theology in any meaningful way!

One thought on “The New Gnosticism”